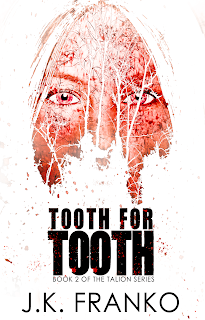 IN THIS BLISTERINGLY RELENTLESS SEQUEL TO HIS DEBUT SHOCKER, EYE FOR EYE, J.K. FRANKO TAKES READERS ON A BREATHTAKING JOURNEY OF CAT AND MOUSE

What would YOU do?

What would you do if you got away with murder? Would you stop there? Could you?


Susie and Roy thought that they committed the perfect crime. Their planning was meticulous. Their execution flawless. But, there is always a loose end, isn’t there? Always a singing bone.


Now, while enemies multiply and suspicions abound, their perfect world begins to crumble.


The hunters have become the hunted.

First things first, read Eye for Eye first. You won't understand and appreciate this book as much without doing so.

Much like the first book, this expertly weaves together multiple plot lines and character interaction. The writing is supreme and highly engaging. I literally did nothing but read this book in one straight shot. I love the narrative device in this series - a therapist telling the stories of his clients, who happen to be serial killers.

The twists in this one managed to be on par with the first one and I am thrilled to see where the third book takes us. I love that each book has a self-contained story, while laying a foundation for the next one. How will I wait until Fall 2020 to indulge my newfound obsession?!
My rating: 5 of 5 stars

View all my reviews

Before meeting Susie and Roy, I had never met a murderer. But then, I had also never lied to the police or destroyed evidence. I had never seen the inside of a jail cell. And I had most certainly never been complicit in a homicide.
I have to reluctantly admit that I am a better person for the experience. I now appreciate that murderers really are just regular people like you and me. Indeed, I have come to consider Susie and Roy more than mere patients... they are friends. And I think back on our time together with nostalgia—fondness, even.
This did not happen overnight. It was a process.
What would you do if you found out that your neighbor was a murderer? Would you double-check that you’d locked your doors every night? Keep an eye out for strange comings and goings? Would you ultimately put your house up for sale, not disclosing what you knew about the folks next door to potential buyers?
For most people, being in the proximity of a killer is neither pleasant nor desirable.
Imagine how I felt about having not one but two as-yet-undetected murderers as my patients. Sitting with each of them for hours every week. Trying to guide them toward more moderate conflict resolution techniques. And failing.
Well, I’m here to tell you that despite the complexities inherent in that situation, I found my path to inner peace and happiness.
I know. I may have said elsewhere that, as a psychologist, I’m not a big believer in “happily ever after.” But my thinking has evolved.
I’ve come to believe more in choices—in the power of decision. This is the key nugget of wisdom I have taken away from this whole mess: We are not what happens to us. We are what we choose.
And I am pleased to report, for the first time in years, that I can finally say I am happy.
You have to understand that my unhappiness was not due to lack of trying. Chalk it up to naiveté—but, at first, it was difficult to process everything Susie and Roy told me and still be happy.
It’s hard to put a positive spin on murder.
Selfishly, I was overwhelmed by the fear that they might turn on me. They had shared everything about their crimes with me in meticulous detail. It was manifestly apparent that I was the weak link. The one person who could bring them down.
I was not just a loose end.
I was the loose end.
And, though I tried, I could not initially find peace under these circumstances. But, as I said earlier, happiness is a choice. And it was a choice that I made which finally ended my torment and brought me to a place where I could be at peace—even though everything ended tragically: my relationship with Susie and Roy, their marriage, the whole mess.
For you to understand the rest of my journey with Susie and Roy, I must share with you something that happened years ago at an ostensibly happy event. I say ‘ostensibly’ because it was a wonderful night for almost everyone concerned.
There were two people at that event who figure in this story—in my story.
The first is Sandra Bissette. For her, the night in question was the beginning of what would become a successful career in politics and law.
For the other, Billy Applegate, the night would end in tragedy.

J.K. FRANKO was born and raised in Texas. His Cuban-American parents agreed there were only three acceptable options for a male child: doctor, lawyer, and architect. After a disastrous first year of college pre-Med, he ended up getting a BA in philosophy (not acceptable), then he went to law school (salvaging the family name) and spent many years climbing the big law firm ladder. After ten years, he decided that law and family life weren’t compatible. He went back to school where he got an MBA and pursued a Ph.D. He left law for corporate America, with long stints in Europe and Asia.
His passion was always to be a writer. After publishing a number of non-fiction works, thousands of hours writing, and seven or eight abandoned fictional works over the course of eighteen years, EYE FOR EYE became his first published novel.
J.K. Franko now lives with his wife and children in Florida.

Visit these other great hosts on this tour for more great reviews, interviews, guest posts, and giveaways!

Popular posts from this blog

November 02, 2019
Dark Halls - A Horror Novel by Jeff Menapace My rating: 5 of 5 stars No disrespect to Mr. King, but with this book, Jeff Menapace has cemented his status as my all time favorite supernatural horror author. Dark Halls holds a few close personal ties for me. It takes place in Pennsylvania, where I grew up, and the protagonist is a male elementary teacher, which is how I began my career. Luckily, that is where the parallels between my life and Ryan's end... although Ryan is my middle name. Ryan is a new hire at a "cursed" school, which has seen its fair share of murder, suicide, and other tragedies. Though he initially scoffs at the rumors, he quickly realizes there is more truth in these legends than most people realize. The writing is fast-paced, succinct, and engaging, as has become customary in Menapace's work. While gory at times, it is not overtly so. The supernatural element makes sense in the context of the book, and even sets
Post a Comment
Read more

Review: A Monster Of All Time: The True Story of Danny Rolling, The Gainesville Ripper

July 12, 2019
A Monster Of All Time by J.T. Hunter on Tour July 1-31, 2019   The True Story of Danny Rolling, The Gainesville Ripper Ambitious, attractive, and full of potential, five young college students prepared for the new semester. They dreamed of beginning careers and starting families. They had a lifetime of experiences in front of them. But death came without warning in the dark of the night. Brutally ending five promising lives, leaving behind three gruesome crime scenes, the Gainesville Ripper terrorized the University of Florida, casting an ominous shadow across a frightened college town. What evil lurked inside him? What demons drove him to kill? What made him A Monster of All Time ? My Review: What a gripping, fascinating tale about a horrifying serial killer and his reign of terror! I consider myself to be quite the true aficionado and I'm shocked I never heard about Rolling before. Now that I have, if I had to describe him in a word: Monster
1 comment
Read more

May 16, 2019
Blackquest 40 by Jeff Bond on Tour May 13 - July 13, 2019 Synopsis: Deb Bollinger has no time for corporate training. Her company's top engineer at just twenty-seven, Deb has blocked off her day for the one project she truly cares about: the launch of Carebnb, an app that finds spare beds for the homeless. When she's told all employees must drop everything for some busywork exercise called Blackquest 40, it's an easy no. Trouble is, her bosses aren't really asking. Blackquest 40 is the mother of all corporate trainings. A near-impossible project to be completed in forty straight hours. No phones. No internet. Sleeping on cots. Nobody in, nobody out. Deb finds the whole setup creepy and authoritarian. When a Carebnb issue necessitates her leaving the office, she heads for the door. What's the worst that could happen? Armed commandos, HVAC-duct chases, a catastrophic master plan that gets darker by the hour - Blackquest 40 is a
3 comments
Read more